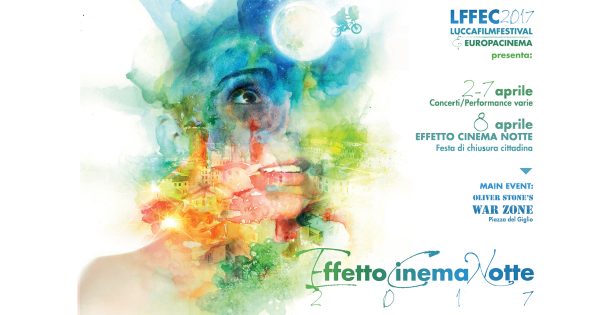 Lucca, March 10, 2017 – A festival within the festival at the 2017 edition of the Lucca Film Festival e Europa Cinema taking place 2-9 April in the Tuscan towns of Lucca and Viareggio. The Festival will pay homage to the Maestros of the seventh art and follow the trends of contemporary film production, without neglecting the tradition of its territory and of its music and acting culture. Lucca Film Festival e Europa Cinema taps into a new way of experiencing and living cinema, as we know it – that of a classic movie theatre – offering instead a diversified and creative program of events that is able to involve all the different souls of the city. Among the scheduled events, a tribute to Oliver Stone, who will also be celebrated in the main event of Effetto Cinema Notte – Day For Night, the International Short Film Contest and the live performance of Ozu’s cinema scores. “This dream factory set in the heart of Tuscany is a source of great satisfaction and enables us to help nurture this event founded by young Lucchesi: an event that has become a truly international cultural endeavor”, stated Paolo Tacchi, of Banca Generali Private Banking, one of the Festival’s main sponsors.

Tribute to Oliver Stone – The American director, screenwriter, producer, actor and three-time Oscar winner Oliver Stone will be at the Lucca Film Festival to receive a Lifetime Achievement Award and to meet the public. The reporter-director, who through his films has traced a multifaceted, critical and timely portrait of America, will be in Lucca on Thursday 6 April for a press conference and on Friday 7 April will meet the public during the Gala Evening dedicated to him at the cinema Astra and introduce his film Alexander, which will then be screened. The 2004 epic film was chosen by Oliver Stone himself and features an all-star cast retracing the life of Alexander the Great. Stone’s stay in Lucca will wrap up with a masterclass open to the public scheduled on Saturday 8 April at 10 a.m. at the Teatro del Giglio. The Lucca Film Festival e Europa Cinema program also includes a retrospective of the Maestro’s works that will trace the entire career of the American filmmaker.

Effetto Cinema Notte 2017 (Day for Night) is a section in its own right within the international film festival that will transform the whole city of Lucca into a giant open-air movie set. Extending over the whole week thanks to the collaboration of the Musical and Art Lyceum A. Passaglia. The Grand Finale is scheduled for the evening of Saturday, April 8, the festival’s closing night. The city will be divided into five different areas matched to a film genre and 42 local downtown establishments are already hard at work with teams of set designers and performers. Among the novelties of the 2017 edition, two new supporters who are sponsoring two new contests and awards; the Best Set Design Prize, to be awarded by Baldini Vernici and the Best Performance Prize, which will be awarded by the Lions Club Lucca Le Mura. Effetto Cinema Notte 2017 (Day for Night) honors the stars of the festival with productions and shows dedicated to them in an entertainment format inspired by the great world cinema, produced thanks to the active involvement of the city’s cultural and economic fabric, in line with the grassroots philosophy the Festival embraces. This year, the Main Event will be “Oliver Stone’s War Zone”, on Saturday, April 8, in Piazza del Giglio beginning at 7 p.m. and featuring two concerts at 11.30 p.m. and at 12.30 a.m. dedicated to three-time American Oscar winner. A representation conceptually inspired by Oliver Stone’s war films and by the various historical scenarios it has crossed over the years to narrate how war – in the end – never changes. The films “Alexander”, “Platoon” and “Born on the Fourth of July” will be the protagonists of the “War Zone”, brought on stage thanks to the collaboration with singer Emma Morton and the historical group in costume “Simmachìa Ellenon – Hellenes’ Alliance”. The audience will enjoy a medley of songs from the soundtracks of the chosen films, film images will be screened on the facade of the Teatro del Giglio, while “the Macedonian army” will perform various military maneuvers inspired by the times of Alexander the Great in the main square. “Oliver’s Stone’s War Zone” is produced by the Lucca Film Festival e Cinema Europa with the support of Astra Bar and Ristorante Del Giglio, is directed by Stefano Giuntini and Cristina Puccinelli together with production manager Elisa D’Agostino and Alessandro Di Giulio as executive producer.

There are 5 areas in the historic center of Lucca that will be taking part in Effetto Cinema Notte on Saturday 8 April: Cult Movie (south area); Command & Conquer (Piazza San Giusto); Music (Piazza San Michele and neighboring areas); 80’s (central street) and Fairytales (east, Piazza San Francesco). Among the movies chosen by the 42 establishments that are setting up the stages and performances, classics like “Trainspotting”, “La Dolce Vita” and “Pulp Fiction” and new hits such as “La La Land”; evergreen movies like “Fame” and “Coyote Ugly”, the” best of the 80’s like “Who framed Roger Rabbit?”, “Rambo”, “Christiane F. – We Children from Bahnhof Zoo”, “Police Academy” and “Dead Poets Society”, without forgetting the area dedicated to fairy-tales that will feature performances dedicated to adults and children like “Cinderella”, “Maleficent”, “Snow White and the seven dwarfs” and “Mulan” to name a few. The partnership with Bonelli Editore has also been reconfirmed and in the north of the city “Bloodywood, vampires vintage feat Dampyr” will join forces with two other events dedicated to blood donation and to the Festival of Volunteers. From midnight onwards, cinema enthusiasts can enjoy the Official After Party hosted by Wom and In2TheMovie at the Cafeteria San Colombano on the city’s renaissance walls.

International Short Film Contest – 23 short films will be competing in the International Short Film Contest that continues to be one of the most important European showcases for experimental cinematography. The Jury will assign the “Best Film” award and the 500 Euro prize. Ten of the short films feature women directors highlighting a selection which this year focuses its attention on new up-and-coming female filmmakers. Anxieties, obsessions, new technology and the fragmentation of our contemporary world are the issues dealt with most frequently by the young directors to narrate new feminine identities in the making. Participating filmmakers come from Poland, France, Spain, Israel, Canada, USA, Netherlands, Japan, Germany, China, Argentina and Italy. As every year, the films premiere in Italy and reflect a wide variety of styles and languages: from classic animation storytelling to visual influences and sensory cinema. All programmed short films share a theme that runs through all the works in competition: the search for identity and for the deepest roots of existence in a world that is occupied by new technologies, where human contact is becoming increasingly fragile and intangible.

Giambattista Chiarelli from Pictet Asset Management, one of the Festival’s sponsors, stated, “In a historical moment characterized by strong socio-political change, Cinema – like other artistic and cultural expressions – allows each one of us to rediscover the core values of our Country and Culture. At Pictet, we believe that, thanks to its wide ranging offer, the Lucca Film Festival actively contributes to achieving this goal”.

The Lucca Film Festival and Europa Cinema directed by Nicola Borrelli, is one of the key events organized and sponsored by the Fondazione Cassa di Risparmio di Lucca. The main sponsors of the event are Banca Generali and Banca Pictet, whereas the exhibits are produced with the support of Banca Société Générale. The organization of the Lucca Film Festival e Europa Cinema is also made possible thanks to the funds made available by Funder35 and enjoys the support of Gesam Gas & Luce SpA, Istituto Luce Cinecittà S.r.l., Fondazione Banca del Monte di Lucca, Lucar Spa, Lions Club Lucca Le Mura, Il Ciocco S.p.A, MiBACT (the Italian Ministry of Cultural Heritage, Activities and Tourism), the Region of Tuscany, the City of Lucca, the City of Viareggio, the Province of Lucca with the collaboration and co-production of the Giglio Theatre in Lucca Consociazione Nazionale donatori di sangue Fratres, Fondazione Giacomo Puccini e Puccini Museum – Casa Natale, Fondazione Carlo Ludovico Ragghianti, Fondazione Mario Tobino, Università degli Studi di Firenze, Martinelli Luce, CG Entertainment, Fondazione Centro Arti Visive e Fondazione UIBI. Thanks also to Lucca Comics & Games, Trenitalia Regional Management, Unicoop Firenze and to the Degree Course in Performing Arts and Civilization Department of Communication and Forms of Knowledge at the University of Pisa, Light It Up Blue – Lucca and App18 for their collaboration.