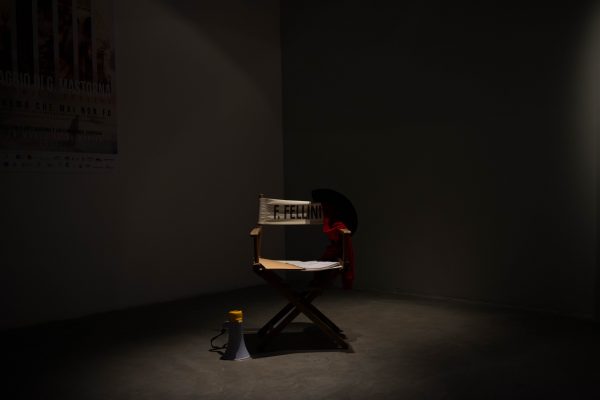 By consecrating again its spaces to the melting of cinema and art, the Gallery offers the perfect setting to Fellini’s oneirism, which came back to life in the 50 executive boards made by the students at Centro Sperimentale. Because what is having birth is not only the dream of  Fellini, but also that of a young generation, such as that of the Centro’s students. In this extraordinary work, they have been coordinated by the teacher Francesco Frigeri, award-winning production designer (among many awards, he won a Nastro d’Argento twice), who was at the inaugural conference, also with the president of Scuola Nazionale di Cinema, Caterina D’Amico.

Great enthusiasm for the project has also been showed by the director of the gallery, Alessandra Belluomini Pucci, who highlighted the importance of a partnerships such as that between teaching and art’s institutions. Enthusiasm shared, in addition, by the Assessor for cultural and educational policies Sandra Mei, who claimed about an highly relevant initiative also taking into consideration the young author’s age.

Therefore, art and cinema, meet one-another along a path where you can witness the coming to life of The Journey of Mastorna. This is accompanied by the music and the dialogues performed by Centro’s students, as a subtext to the visitor’s stroll surrounded by the several sketches and film boards: Saraghine, nuns and many other women taken directly from the imaginary archive of the Rimini master. Then, a Mastorna-Mastroianni with his face hidden behind the heavy violin; the melancholy yet unmistakable gaze and the hat made of felt.

The hat itself lies on the back of the legendary “Fellini” seat to welcome visitors. Besides in the nearly-dark room, a screen from which the face of the master narrates (and is narrating, until April 30) about the movie, in a series of unreleased interviews.

Ciack, a glimpse in the future

Il viaggio di Mastorna. Sogno di un film messo in scena is the first stage of a five-year project by Centro Sperimentale di Cinematografia, which houses the preparatory materials of four films other left unfinished by the greatest national directors: Paradiso Inferno by Bernardo Bertolucci; Porno Teo Colossal by Pier Paolo Pasolini; A la recherche du temps perdu by Luchino Visconti and I Fiorentini by Franco Zeffirelli. The Centro is looking forward to fulfill, on Mastorna pattern, the other four screenplays. A work on cinema which pays tribute to its cornerstones and, at the same time, finds itself able to make the past alive again thanks to new and most advanced technologies, such as computer graphics.

Lucca Film Festival e Europa Cinema 2017 celebrates, by this way, a master such as Federico Fellini, as well as young Italian excellences, in the name of an eclecticism and a trend towards research which has shaped it since its founding in (not so far) 2005.