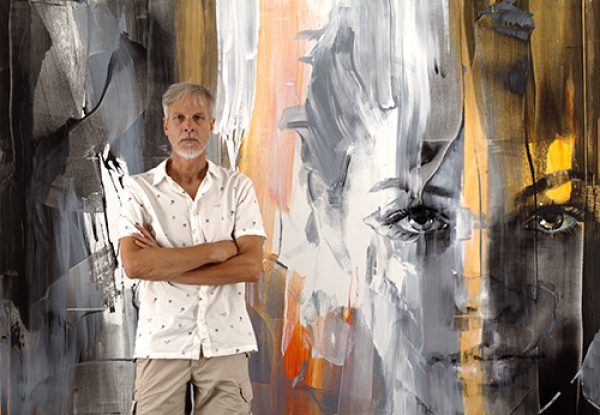 Sponsored by the City of Lucca and the Regione Toscana, with the support of Société Générale, the exhibition is part of the varied proposal of side events of the Lucca-based kermess dedicated to the seventh art. Together with a prestigious editorial initiative, which features, among others, even a contribution by the art historian Alessandro Romanini, Stars and Frames will consist of more than twenty large-scale canvas, subdivided in two sections: the former dedicated to the faces of many celebrities of the big screen, the latter to the frames, that is, to the “still images” taken from some unforgettable films. The visitor will be thrown into an ideal “Red Carpet” and walk side by side with many well-known Hollywood Stars, and much more.

Of Friulian origins, Toffoletti is a mature and established artist. In his work, he employs the most varied techniques: ranging from photography to frescos, from drawing to video, but painting is the technique he is most familiar with. Citing Riccardo Ferrucci: “His work is a constant search for beauty that becomes a vital necessity, never a simple complacency. His women are faces and bodies that seem to come from a past, from afar, from an exotic place that belongs to us and moves us”.

The exhibition will be inaugurated September 25, 2021, in the presence of the authorities, and the organizers of Lucca Film Festival who, in collaboration with Casa d’Arte San Lorenzo, are the promoters of the event. To be noted, the collaboration with C.R.A. (San Miniato’s Centro Raccolta Arte) and the support of FuoriLuogo.

Entrance is free, allowed after showing a valid covid certification (called “Green Pass” or “Certificato Verde”), in accordance with the anti-Covid regulations.

Pier Toffoletti was born in 1957 in the province of Udine. His passion for painting started early. In 1976 he obtained the high school diploma of “maestro in applied arts in the branch of applied graphics and photography” (“maestro in arte applicata nel ramo di grafica pubblicitaria e fotografia”) at Udine’s Liceo artistico. In 1979 he opened an advertising studio and started working both as a creator of advertising campaigns and a director of television commercials and video clips. He also started collaborating with local and national television broadcasters, where he began creating many cartoon shots and video clips. Until 1955, Toffoletti painted in his spare time, switching between this passion and the speleology. Between 1992 and 1995, a series of travels in Central and South America marked the beginning of an important change that led him to a full-time dedication to painting. From that moment on, his artistic career has seen a continuous escalation of successes, critics, and audience acclaims. He participated in many solo and group exhibitions, among which; in 2007 at the Palazzo della Gran Guardia in Verona; in 2008 at the Museo Correr in Venice, in the hall of the Biblioteca Marciana, at the Palazzo Senato in Milan and at the OPEN XI, Venice Lido; in 2011 he exhibited at the 54th Venice Biennale, with a solo exhibition at the Palazzo Molino Stucky; in 2012 he exhibited at the Art Basel Miami; in 2013 at the Casa Museo Spazio Tadini in Milan; in 2015 at the Palazzo dei Giureconsulti, Milan Expo circuit; in 2016, at the Red Dot Miami, Art Basel circuit; in 2017 at the Chiesa di San Domenico in San Miniato, Pisa; in 2018 at the Town Hall of Stuttgart; in 2019 at the PAN, Palazzo delle Arti di Napoli; in 2020, at the Chiesa di S. Maria della Spina, Pisa; in 2021 he exhibited at the 17th Architectural Biennale of Venice, as a part of the project “Senza terra- Pomerio”, and in a solo exhibition at the Centrum Sete Sois Sete Luas.

Numerous also his participations at many well-known international Art Fairs, among which Madrid and New York, as well as Yokohama, Las Vegas, Philadelphia, Innsbruck, and Strasbourg. His works can be found in many public bodies and private collections in Austria, Belgium, Croatia, Germany, Japan, France, Luxembourg, the Netherlands, Slovenia, Spain, Switzerland, Ukraine, and the United States of America.