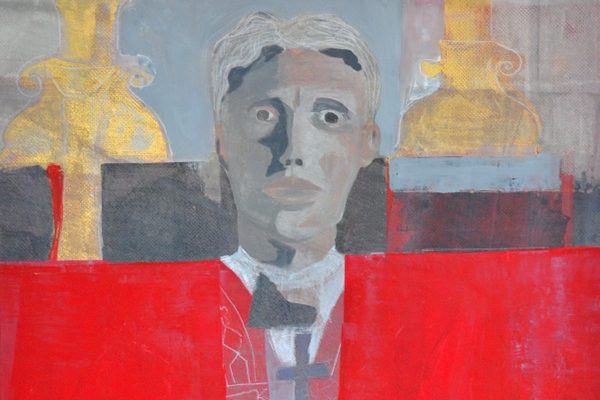 The 2022 Lucca Film Festival will launch Marcello Scarselli’s personal exhibition in Palazzo Pfanner on the 30th of September 2022 h. 6pm, called ‘Good Morning Taviani’. The exhibition is dedicated to the Taviani brothers, who are among the most significant artists in contemporary cinema.

Paolo Taviani will be a guest to the Festival for the occasion. He had already been present in 2007 and 2019, when he was awarded Unesco’s Fellini Medal by Alfonso Cuaron. The exhibition, curated by Riccardo Ferrucci, will be open until the 16 th of October 2022, and is part of the Festival’s expository part, which is coordinated by Alessandro Romanini, organized and supported by the Cassa di Risparmio of Lucca Foundation and sponsored by the Municipality of Lucca and the Italian Region of Tuscany.

Marcello Scarselli’s aim is to capture through thirty paintings the magic and poetry of the Taviani brothers’ most famous films that revolutionized Italian and International cinema. The painter was specifically struck by three of their films: Kaos, Good morning Babilionia and La notte di San Lorenzo. Scarselli states: “I’m particularly attached to the latter, not only because it makes the public relive the dramatic reality of the Second World War, but it also reminds me of glimpses of my childhood: my grandfather was born in San Miniato. He was a farmer, and he would often tell me stories about the countryside at that time, how it was hard to work in but incredibly beautiful. Characters like Galvano remind me of him, an ordinary person, that didn’t talk much and didn’t own a lot of possessions, basically only two First World War medals and a pocket watch with its chain. When I would ask him to show me his medals he would always say that they would become mine when he passed away.”

Looking at Scarselli’s work, as Riccardo Ferrucci states in the catalogue, we can find a number of themes and mysteries that were particularly relevant to the Taviani brothers, starting from isolated, obscure lands to going back to the roots to rediscover harmonies and lost emotions. It’s a journey in our past to better understand our present and future. As the two Tuscanian directors explained: “always leaving and going back, as to avoid considering the existing reality as the only one… only going back in time, the chaos can restructure itself in a meaningful order, and it becomes a logical process”.

The exhibited paintings, both the figurative and abstract ones, give us back the pathos and emotions of a cinema that focuses on interrogating humanity and its landscapes. The artist from Pisa, represents elements like an urn, the moon, the church, the wheat fields that become the starting point for a trip down memory lane and down the dreamland of Paolo and Vittorio Taviani’s films.

Marcello Scarselli was born in Santa Maria a Monte (Pisa), in 1953. He lives and works in Bientina (Pisa).

Scarselli’s carreer in the arts begins in the Seventies, by participating in numerous group exhibitions and intervening in the time’s heated debate on aesthetics. His friendship and cultural exchange with Tuscanian artists such as Mario Madiai, as well as getting to know internationally famous artists such as Ennio Calabria and Giancarlo Ossola, were very significant experiences for his artistic formation.
His profession as an artist is consolidated in the years through his continuous expositions in Italy and abroad (in Austria, Belgium, Germany, France, Switzerland, Portugal, Croatia, Japan), with innovative anthological exhibitions, like the ones held in Paris’ “Maison d’Italie” (Cité Universitarie), at the Foire de Nice, where he was invited by the Italian Chamber of Commerce in France. Scarselli has also experimented in sculpture, by creating the Pescatori Union’s old coat of arms, located in the Del Rosso family’s palace and certified on the historic walls of Bientina (PI). In honor of his city, he also crafted a bas-relief representing the Vittorio Emanuele Square, as well as the “cencio” (a peculiar painted cloth) for the Palio (2002).
Among his manual work, there is also a number of manufactured labels for prestigious Bolgheri wines, created specifically for the Versilia Wine Art exhibition, curated by Ludovico Gierut.

Between 2010 and 2011, he took part in the traveling group exhibition “50 pittori toscani per 50 cantanti toscani” with a work of art dedicated to the rock music group Baustelle, which he exhibited in twelve spots in Tuscany. In 2011, English art critics selected him for an International exposition at the Royal Opera Arcade Pall Mall Gallery in London. In 2012, he creates a painting for the Municipality of Pontedera, called “Omaggio a Renzo Remorini” which was placed in the La Badia Centre. One of his works of art is part of the Pinacoteca of Contemporary Art of Ciocco a Barga (Lucca). Some have also been used as settings for avertisement photoshoots like the commercial catalogue “Dream design” (2006) of Tongo/Delta group and the Soggetto-Oggetto Art catalogue (2012).
In 2012, Scarselli becomes one of the artists protagonist of Rita A. Dollmann’s photography exhibition “Lo spazio e l’artista”: the final act of her reportage on art studios, which was set in the outside itinerary of Castello Ginori di Querceto in Montecatini Val di Cecina (PI). In 2013, he holds his great itinerant exhibition “Humanitas Machinæ (il lavoro dipinto)”, curated by Giuseppe Cordoni and Filippo Lotti, set in Palazzo Medici Riccardi in Florence, Palazzo Mediceo in Seravezza (LU) and Museo Piaggio in Pontedera (PI). In 2014, after the group exhibition “Il Muro – 25 anni dopo” in the Federal Republic of Germany Embassy in Rome, he donates one of his works to the Embassy, in remembrance of the Fall of the Berlin Wall. In the same year, one of his paintings is used on the cover of the poetry book by Italo Zingoni “Strana-mente distratti dalla vita” and some other paintings of his decorate the book. In 2017, he takes part in the Fiordamaro Gallery exhibition “Oltre la fama” in Palazzo del Pegaso, curated by Riccardo Ferrucci. In 2018, he presents “Symbola” with Luca Nannipieri at the Simmi Gallery and then he holds his exhibition in Palazzo dei Priori in Volterra (PI). In the same year, he’s invited to Tokyo, Japan, where he presents “Il rumore della Materia” at the Tokiù Plaza. In 2019, his “Burattino senza fili” exhibition in the Parco di Pinocchio Foundation in Collodi (PT), and “Large &amp; Underground” at the L.U.C.C.A Museum, curated by Maurizio Vanni. In the same year, he creates “Lavoro, Salario, Dignità, Libertà”, a monument in honor of the inhabitants of San Miniato that tragically died on the workplace. In 2020, his exhibition at the Spina su Pinocchio Church takes place, created along with the San Lorenzo Art Gallery, and he also creates the school Miro’s Mural commissioned by the Municipality of Pontedera. In 2022, his Artinsolite Teatro Del Silenzio Lajatico Art Exhibitions are held, directed by Filippo Lotti and Alberto Bartalini.

A considerate number of his works is exhibited in museums, public and private collections, both in Italy and abroad. Official website: www.marcelloscarselli.com