Bruno Monsaingeon: between cinema and music 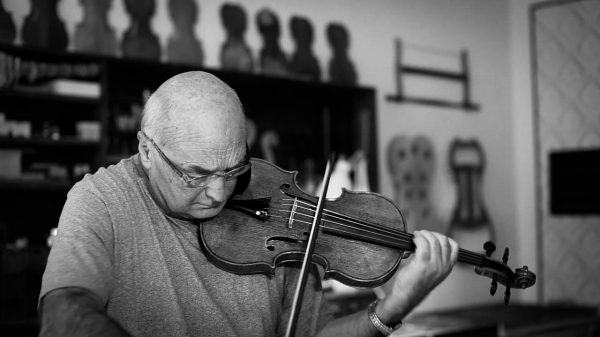 These are the closing words said by the great Russian pianist Sviatoslav Richter, in the biopic about him by Bruno Monsaingeon. An epitaph which at the same time connotes the excellence of French director and musician, also as a portraitist. Because Bruno Monsaingeon is this, much of the music actor (capable of acting in music, firsthand), as the wise spectator of another’s talent. And if he is a spectator, it is, above all, in order to rebuild: the total artist, able to transpose on film characters such as Richter, in its dual aspect of “cold-blooded genius” and “incredibly sensitive and vulnerable man”. Working along side by side, Monsaingeon manages to assemble a filmed and played portrait about Russian genius, succeeding in the making of the award-winning film Richter, The Enigma (1998). But this is just one of the fascinating lives observed and summarized from the musical-eye of Monsaingeon.

Music to write and music to be filmed

Parisian violinist himself, over the last thirty years Monsaingeon consecrates his career to interdisciplinary. A strong bond between cinema and music, thanks to which he tirelessly produces biographies about the most relevant musicians of the twentieth century images. He collaborated extensively with Yehdi Menuhin and Glenn Gould, composers portrayed in several of his films, focusing on different aspects of their work. Two in particular are worth him great success worldwide: The Open Wall, Menuhin in China and The Goldberg Variations. Menuhin is also the protagonist of the documentary in three episodes Retour aux Souces, on his return to the Soviet Union.

Stories of men and artists

In the 90s he undertook two long-term projects. The first, on Dietrich Fischer-Dieskau, follows the work of the German master through several concerts and masterclass of Mozart, Schubert and Schuman, ending in a documentary summa entitled Dietrich Fischer-Dieskau, Autumn Journey (1998). The second project concerns David Oistrakh, deservedly known to his fans as “King David”. Monsaingeon traces his history from birth in Odessa in 1908, until his death in Amsterdam, 1974. The result is the film David Oistrakh, Artist of the people? (1995), tale of a talent grown wounded in the shadow of Stalinism:

“the music was the only chink from which filtered the sun… oxygen, life.”

A dense biography of materials and evidence: on one hand Rostropovich, Menuhin and Rojdesvensky, knowledgeable fans of his work, who speak of a musically extraordinary personality; on the other hand, the witnesses of his son Igor, musical composer himself, equally valuable in order to light on the man. This is, after all, the great ability of Monsaingeon Director: to make the human, deep, personal track surface from the artist portrait.

In 2012 he also complete Glenn Gould. The Alchemist, in-depth documentary about Glenn Gould. Once again Bruno Monsaingeon portrays a deity of the music scene in the best of his artistic talent.

Glenn wrote to me: “I’ll remember these days as the happiest of my professional life’.”

Cinema and music in Lucca

The French director will be at the Lucca Film Festival and Europa Cinema for a project in collaboration with the Istituto Luigi Boccherini. He will be prized with the lifetime achievement award and he will conduct a seminar on the link between music and image. He will also be honored with a tribute to his film, during festival.