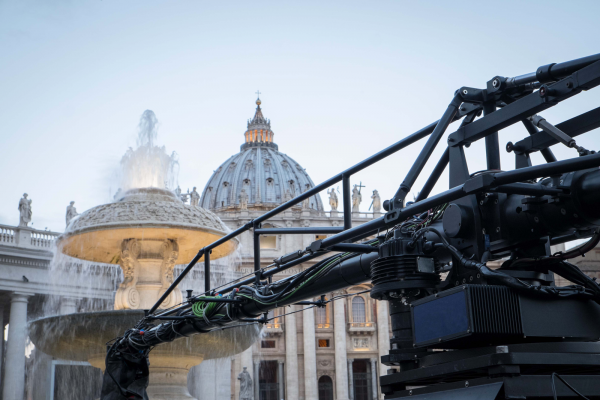 Again in the 2018 edition, Lucca Film Festival e Europa Cinema devotes great attention to its exhibitions and in collaboration with the Experimental Center of Cinematography in Rome, SKY and the Teatro del Giglio, this year features two extraordinary projects that highlight the intimate link between Cinema and Art.

Luchino Visconti. In Search of Lost Time. History of a never-made film

dedicated to Visconti’s dream of transposing on film Marcel Proust’s Recherche. Led by set designer Francesco Frigeri and by costume designer Maurizio Millenotti, students of the Department of Stage and Costume Design of the Experimental Center of Cinematography in Rome have drafted 45 storyboards and designed 40 costumes following the many directions and instructions given by Visconti and his collaborators.

Close up on Art at the Cinema.
Behind the scenes of Sky Art Cinema

The exhibition showcases over 40 large-format stills together with documents and videos of recent films on art and architecture produced by Sky and features the video clips from which the photographs were taken.

“Our heritage: where the past meets the future” is the motto of the first European Year of Cultural Heritage and the guiding principle of the two exhibits hosted in Lucca. On the one hand, Visconti. An eclectic and multifaceted author, a film director, a documentary filmmaker, a screenwriter and theater director who was always able to blend tradition with the innovation of visual languages. A man, who dreamt of translating the over 3000 pages of La Recherche into a film and who involved his long-time collaborators such as Suso Cecchi d’Amico, production designer Mario Garbuglia and costume designer Piero Tosi  into long sessions and on-site visits to “Proustian” venues, leaving behind over 400 photos by Claude Schwartz and a huge amount of notes.  On the other hand, Sky network’s use of cinema as a means to illustrate and promulgate Art, the coming together of masterpieces of Western art and cutting-edge audiovisual technologies. Works of Art, places and museums, which in some cases have been captured on film or the first time and that, are narrated in a completely new way.

The exhibition dedicated to Visconti, at Palazzo Ducale, shows us how each of his films was inspired by a literary text and how, since his early writing efforts, Visconti harmoniously blended the various arts. James M. Cain’s The Postman Always Rings Twice relives in Obsession; Giovanni Verga’s I Malavoglia inspired The Earth will Tremble and his White Nights is based on Dostoevsky’s eponymous novel. Camillo Boito is the source of inspiration for Senso or The Wanton Countess, Giovanni Testori’s short stories are the foundation for Rocco and His Brothers, Tomasi di Lampedusa gives life to the masterpiece The Leopard, Camus is ever-present in Visconti’s The Stranger and Thomas Mann inspires Death in Venice, the last of the Italian director’s German trilogy following Ludwig and The Damned. Not to speak of the myth of Elektra and Orestes present in Sandra (Of A Thousand Delights) and Visconti’s last film The Innocent based on Gabriele D’Annunzio’s novel.

The Ragghianti Foundation – named after one of the main theorists and pioneers of the use of the cinematographic means to explain the creative process behind the works of art – hosts the exhibit Close up on Art at the Cinema. Behind the scenes of Sky Art Cinema. Visitors are guided through a journey to discover the “dream machine”  as it zooms in on Art, which for the first time is screened at the cinema. Large-format photographs of the sets, of the actors in the various stages of filming, of behind-the-scenes film and art professionals at work, shots of directors, screenwriters, art historians, cinematographers, set designers, costume designers and, finally, a guide into the processes of the new  3D, Ultra HD and Virtual Reality “immersive” technologies.

Thanks to cutting-edge audiovisual technologies, viewers can enjoy never-seen-before footage of the masterpieces of Michelangelo, Raphael and Caravaggio and can experience first-hand the places that inspired these great artists. The temples that enshrine these masterpieces of human intellect are shown to the public in all their glory thanks to Sky Art Cinema’s ability in bringing together captivating cinematographic story-telling and the latest technologies. From the Vatican Museums and breathtaking aerial views over Rome to images of the Papal Basilicas that are not open to the public; from Florence, the open-air museum par excellence, to Urbino and the places where Raphael grew up.

Thanks to the collaboration and co-production agreement, all holders of an admission ticket to the Ragghianti Foundation (from 1 January 2017 onwards) are entitled to the following Festival discounts: