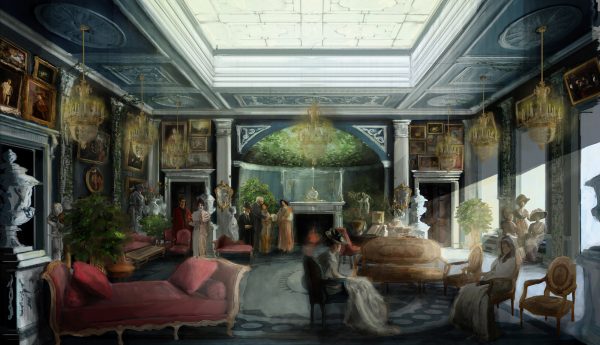 in collaboration with the Teatro del Giglio di Lucca

History of a never-made film

Again in the 2018 edition, Lucca Film Festival e Europa Cinema promotes a special section that focuses on the intimate link between Cinema and Art and reaffirms its partnership with the Experimental Center of Cinematography (Centro Sperimentale di Cinematografia) in Rome.

After last year’s tribute to Federico Fellini and The Journey of G. Mastorna hosted at the Municipal Modern and Contemporary Art Gallery in Viareggio (GAMC), this year, Luchino Visconti is the protagonist of a remarkable exhibition hosted at the Palazzo Ducale in Lucca with the collaboration of the Teatro del Giglio entitled Luchino Visconti. In Search of Lost Time. History of a never-made film. The exhibit will open on Saturday, 17 March – on the anniversary of the day -Visconti passed away in 1976 – and close on Saturday 21 April 2018. Curated by set designer Francesco Frigeri and by Alessandro Romanini, this exhibit is the second pillar of an ideal foursome devoted to films that were long thought and dreamt of by great Italian directors but that never saw the light of day. Pier Paolo Pasolini and Bernardo Bertolucci will complete this ideal cycle in the next years.

Over 40 executive storyboards, that is to say storyboards that are ready to be transformed into a film set, a similar number of costume sketches and a wide range of original documents will be on display in the Sala Maria Luisa and the Loggia dell’Ammannati in Palazzo Ducale. A journey that illustrates Visconti’s dream of transposing on film Marcel Proust’s À la recherche du temps perdu. This project is the fruit of the efforts of students of the Department of Stage Design in Rome headed by Francesco Frigeri and of students of the Department of Stage and Costume Design led by costume designer Maurizio Millenotti, both from the Experimental Center of Cinematography in Rome. Production designer and art director Francesco Frigeri is well known for his work in The Passion of Christ directed by Scorsese, for Malena and The Legend of 1900 directed by Tornatore, for the television series I Borgia and The Name of the Rose, now in post-production. Italian costume designer Maurizio Millenotti was nominated twice for the Academy Award for Costume Design for Othello and Hamlet both directed by Franco Zeffirelli. He is also known for his work in The Belly of an Architect directed by Greenaway, Federico Fellini’s The City of Women and The Voice of the Moon, Giuseppe Tornatore’s, The Best Offer and The Wait by Piero Messina. Millenotti recently designed the costumes for The Happy Prince directed by Rupert Everett that will be premiering in Italy at the Lucca Film Festival.

Luchino Visconti’s interests were eclectic and broad, ranging from cinema – 14 feature films and three medium-length films – and documentaries, to theatre, personally directing over 40 plays, 20 operas and 2 ballets. Visconti was a screenwriter, an avid reader, a passionate opera-buff and an inexhaustible lover of the visual arts. This exhibition renews the strong ties between the director and the city of Lucca. A bond that has its origins in Visconti’s childhood when he used to sit in the family living room that was often frequented by Giacomo Puccini, thanks to his mother, Carla Erba, a relative of Giulio Ricordi, the publisher of the great composer and musician from Lucca. In 1941, Luchino Visconti co-designs a cinematographic version of Puccini’s Tosca that is co-directed by Jean Renoir and Carl Koch. In 1973, as Luchino Visconti is getting ready to launch the Ludwig project at the cinema, he directs Manon Lescaut at the Teatro Nuovo in Rome with costumes designed by Piero Tosi and realized by the Sartoria Tirelli. Together with a film dedicated to Proust, one of Visconti’s unfulfilled dreams will remain the making of a film on Giacomo Puccini.

Luchino Visconti’s interest for Proust starts at an early age thanks to his father’s passion for the great French novelist and continues through his schooling and his activity as a director. In the mid-1960s, Nicole Stephane buys the rights of La Recherche and initially asks Ennio Flaiano – and later Enzo Siciliano – to transpose the great work into a screenplay. In 1968, In Search of Lost Time lands into the hands of Visconti, who works on it non-stop, even while he is preparing and filming Death in Venice., The result is a 363-page script written by Visconti’s trusted collaborator Suso Cecchi d’Amico that translate into more than three hours of film. Months of research and inspections carried out by the director together with the screenwriter and the set designer Mario Garbuglia generates countless costume sketches drafted by the trusted Piero Tosi and more than 400 photos of the places of La Recherche taken by Claude Schwartz. A pharaonic project, which had to be abandoned due to lack of funding.

The above-mentioned materials and Visconti’s notes inspired the students of the Experimental Center of Cinematography in making the director’s dream of a film dedicated to Proust come true. The works on display do justice to his vision and to the great work carried out by Visconti and his collaborators in documenting and interpreting La Recherche. The storyboards evoke the Parisian composure and decor of a café in the late 1800s, the glamorous ambiance of the Grand Hotel Balbec and the hissing of the blades cutting the fabric at the Jupien store. We listen into the controlled buzzing of female conversation in the villa of the Marquise Samson as we are transported to Ville Lumiére, the magnificent heart in Place des Vosges and hold our breath as we plunge into the bitter routine of war thanks to the visual description of the anti-aircraft shelter in the Invalides metro station.

The exhibition Luchino Visconti. In Search of Lost Time. History of a never-made film offers this and much more, as it traces a path in true Visconti style between French music, art and an infinite number of visual references that spanned across the late 1800s and’ the early 1900s.

The main sponsors of the event are Banca Generali and Banca Pictet, whereas the exhibits are produced with the support of Banca Societe Generale. The organization of the Lucca Film Festival e Europa Cinema is also made possible thanks to the funds made available by Funder35 and enjoys the support of Gesam Gas & Luce S.p.A Istituto Luce Cinecittà S.r.l., Fondazione Banca del Monte di Lucca, Lucar S.p.A, Alleanza Assicurazioni S.p.A, Luccaorganizza, Il Ciocco S.p.A, MiBACT (the Italian Ministry of Cultural Heritage, Activities and Tourism), the Region of Tuscany, the City of Lucca, the City of Viareggio, the Province of Lucca with the collaboration and co-production of the Martinelli Luce, Cantina Campo alle Comete, Giglio Theatre in Lucca, Fondazione Giacomo Puccini e Puccini Museum – Casa Natale, Fondazione Carlo Ludovico Ragghianti, Università degli Studi di Firenze, Fondazione Centro Arti Visive, Fondazione UIBI and CNA Cinema e Audiovisivo Toscana. Thanks also to Lucca Comics & Games, Trenitalia Regional Management, Unicoop Firenze and to the Degree Course in Performing Arts and Civilization Department of Communication and Forms of Knowledge at the University of Pisa and Photolux Festival for their collaboration.

The history of a Never-Made film