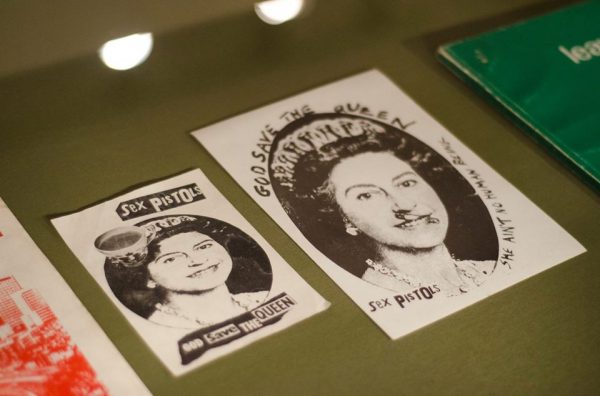 PunkDada Situation is one of the great exhibits organized by Lucca Film Festival e Europa Cinema in collaboration with the Fondazione Ragghianti. Located in the renewed “Mezzanino” of the Fondazione, the exhibit was inaugurated on the 3th of April, with the presence of John Tiberi, official Sex pistols’s photographer and road manager and Julien Temple, legendary music filmmaker, who was awarded by Lucca Film Festival e Europa Cinema, director of many of Sex Pistols videoclips and of a documentary to them dedicated called The great rock and roll swindle. In the movie is described the “swindle” schemed by Sex Pistols’s Manager, who is “guilty” for creating the Punk and revolutionary image of the band to earn from their popularity and their behavior. As John Tiberi, author of the exposed photos, said: the exhibit is giving the chance to finally see Sid Vicious and Johnny Rotten as never before. Away from the telecameras, the British bad boys reveal themselves to the audience as a group of young friends, almost a family. Alessandro Romanini, Curator of the exhibit, spoke about the familiar ties that bind the Pistols; as all of them never really had a normally family, coming from unlucky enviroments, some with negligent parents and some almost orphans.

The expositive area also offers a wide retrospective dedicated to Temple and punk, using audio and video instruments, combine with authentic documents and letter that tie the Pistols with the advertising world. What the exhibits promises to do, is to go beyond the usual consumeristic and commercial view of the band and the Punk movement in general, frequently labeled as just a rebellion youthful phase, a light bound to goes out soon. Punk was indeed the last avan-gardist movement of western art and the exhibit show some of the first books about the “revolution” translated.

Is not a case that the exhibit contains “dada” in his title name. Thanks to some photos showed, where we can see some young girls dressed and wearing “punk-dada” clothes, is possible to notice the thin line that goes between “fashion” and punk. Thanks to the work of Alessandro Romanini and John Tiberi we can finally discover the bounds between the punk aesthetic and the modern and contemporary artistic movement, which brighten that cultural value and not the commercial one of the Punk movement. From the middle ’70 the world changed thank to the Pistols and the places and people connected with them: The manager Malcolm McLaren, Vivienne Westwood, the 100 clubs were they held their first concerts, the King’s road shop. The centers, eventually, of the last true cultural revolution.

The exhibit will be possible to visit until the first of may.