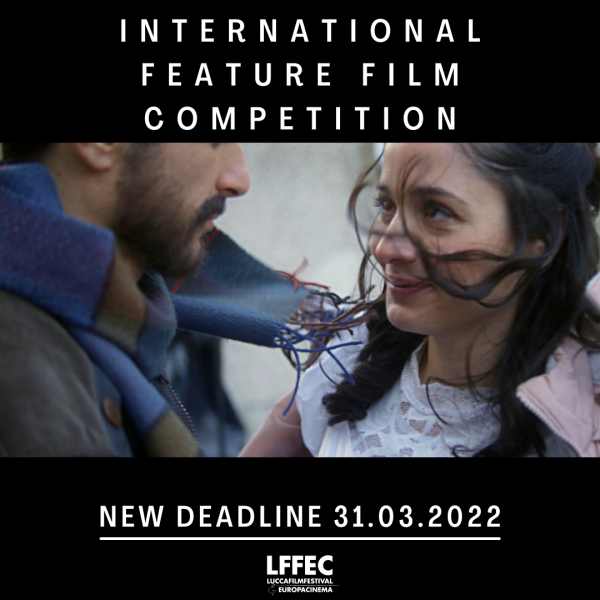 Contemporary film production is the focus of the Festival 2022

Lucca, January 27 – Registration open to the Lucca Film Festival and Europa Cinema 2022 international feature-length film and short film competitions. The Festival will take place from September 23  to October 2 between Lucca and Viareggio and is one of the events organized with the support of Fondazione Cassa di Risparmio di Lucca. Every year the Festival brings the great names of international cinema to Tuscany, from Oliver Stone to David Lynch.

Independent contemporary film productions will be selected by a jury of experts and valued in the best way possible in this 2022 edition of the Festival. The films will be screened not only in the cinemas of Lucca, but also online for the entire duration of the event, thanks to the well-established partnerships with MyMovies for feature-length films and Festival Scope for short films. The films will be subject to a precise communication and promotion strategy aimed at increasingly highlighting the importance of cinematographic representations of today’s world and the directors’ talent.

12 films will be selected for the feature-length film competition and they will compete for the assignment of four awards: Best feature-length film (3000 euros), awarded by a jury of prominent names of the cinema world, Best feature-length film – Student jury, awarded by a jury of university students, Best feature-length film – Popular jury (audience award) and and the Marcello Petriozziello Award.
Films can be submitted by March 31, 2022 via the portals Filmfreeway and Festhome; there are no restrictions of genre or topic, however the films shall have a minimum duration of 60 minutes and shall not date back to years prior to 2021. Besides, the films shall be national premieres, that is they must have never participated in Italian festivals, have never been on online platforms open to the public or have never been in any way broadcasted or distributed in Italy. In order to participate, it is required to send a screener of the work online (with a list of dialogues in English, in case neither the spoken dialogues nor the subtitles are in Italian).
The international jury of the previous editions was made up of important figures of the cinema world like Paulo Branco, Claudio Giovannesi, Daniele Gaglianone, Massimo Gaudioso, Cristi Puiu, Rutger Hauer and Philip Groening. The selection committee consists of Martino Martinelli and Stefano Giorgi.
Selected films will be announced (on the website and social network pages of the event) by August 20, 2022 (for more information: featurecompetition@luccafilmfestival.it).
The complete announcement of selection is available on the website of the Festival: www.luccafilmfestival.it/en/feature-length-film-2022-call-for-entries/

The short film competition is an integral part of the festival’s history that in 2022 reaches its seventeenth edition. The winning work will be awarded a money prize of 500 euros.
Applications shall be submitted by March 31, 2022, sending the film in the form of a link to competition@luccafilmfestival.it or registering on Filmfreeway and Festhome. Films produced preferably not later than 2021 will be accepted.
Every year more than 300 participants – including famous names such as Adan Jodorowsky, son of the very well-known Chilean artist, but also directors the likes of Luca Ferri, Adriano Valerio, Giuseppe Boccassini, Giuseppe Spina, Leonardo Carrano, Bonifacio Angius – come under examination of the committee headed by Rachele Pollastrini. Authors which are nationally (for example by the Venice film festival) and internationally (by Berlin, Locarno…) renowned, in an ongoing dialogue between experimentation and opening to the most diverse genres.
Selected films will be announced (on the website and social network pages of the event) by August 20, 2022 (for more information: competition@luccafilmfestival.it).
The complete announcement of selection is available on the website of the Festival: www.luccafilmfestival.it/en/short-film-2022-call-for-entries/