Peter Greenaway at the MuSA 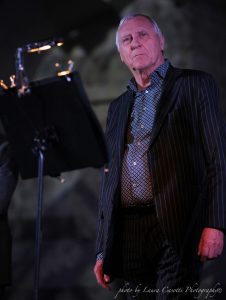 Saturday, June 28th, Peter Greenaway will be guest of MuSa, Virtual Museum of Sculpture and Architecture in Pietrasanta, for the exhibition Scolpire il tempo – Mindcraft, curated by Alessandro Romanini, director of Fondazione Centro Arti Visive di Pietrasanta. The event, that will take place within the festival Homo Faber, dedicates to the great British director this weekend screenings. At 18.30 pm Greenaway will hold a lesson on cinema and will announce his videos, that will be shown on Saturday and Sunday nights.

Peter Greenaway, a true craftsman-director who loves to work directly on every part of his films and videos as in an atelier, is known to the cinema lovers for films as The Draughtsman’s Contract (1982), The Belly of an Architect (1987), The Cook, the Thief, His Wife & Her Lover (1989), Prosero’s book (1991), the more recent Nightwatching (2007), Goltzius and the Pelican Company (2012) and the latest Eisenstein in Guanajuato (2014), dedicated to the russian director.

The event at the MuSa, curated by Alessandro Romanini, also gives the opportunity to unveil new traits of Greenaway’s work: the director is an eclectic artist, who managed – during his 50-years-old career – to harmonically alternate between the most different fields of arts. Greenaway is also a painter, a writer, curator of exhibition (we mention Flying out of this world in 1994 at Louvre museum; Stairs 1 Geneva in the Swedish city and 100 objects to represent the world in Guanajuato, Mexico), documentaries producer (such as 1995’s Lumière et compagnie, dedicated to the cinema pioneer and Rembrandt’s J’accuse on the Flemish painter), a passionate music estimator (he has been collaborating with musician Michael Nyman and others – such as Wim Mertens – for over 10 years, and he dedicated documentaries to Mozart, John Cage, Meredith Monk, Robert Ashley, Philip Glass), and from 1965 he’s also a film editor for the British Office of Information.

In addition to this, he has also designed and realized multimedia exhibitions on a large scale, hosted in several cities around the world. Between these, the latest is The Towers/Lucca Hubrys, produced last year in Lucca by Change Performing Arts, promoted and financed by Fondazione Cassa di Risparmio di Lucca and realized in collaboration with Lucca Film Festival and Aldes – whose catalogue will be shown during the night at the MuSa.

Anyway, most of all we must remember Greenaway’s tireless activity as video experimenter. This is the director’s career’s most interesting trait, and it is the one that most will be put in light during the meeting with the director. Greenaway has been one of the most important pioneers in the experimentation of new audio-visual technologies (beginning in the 80s with the paintbox), as we can see in the 1989 BBC’s tv show Dante’s inferno – dedicated to the great poet’s Divina commedia and realized in collaboration with the artist Tom Phillips. Dante’s inferno will be screened Sunday, June 29th at the MuSa, during the night dedicated to the italian poet.

As Greenaway himself stated, his cinema takes inspiration from his pictorial education, and it’s thanks to that very medium that he manages to renew the canons of contemporary vision and to give new life to cinema.

His bond with painting and history of art – particularly with the Italian one – is marked throughout his whole filmography, especially in films such as Propsero’s book, that appears as a “cornucopia” of pictorial citations from Italian renaissance, and Nightwatching, dedicated to Rembrandt.

Architecture – especially classic Italian style – is also one of the most loved themes (The belly of an architect was shot in Rome), as well as music (M is for man, Music, Mozart) and dance (1992’s Rosa, was realized on the choreographies by Anne Teresa de Keersmaeker).

Finally, science and technology have always had a great fascination on the British artist: he has often made those two fields of study the main themes of cinematographic productions (Darwin, 1992) and most important, he used digital innovations in order to realize movies and to intervene on every visual detail as a painter does with his canvas.

This very craftsmanship in cinematographic production makes him the perfect symbol to celebrate this year’s edition of audio-visual exhibition Scolpire il tempo – Mindcraft within Homo faber, not only dedicated to the Pietrasanta’s artisans, but also a tribute to Michelangelo for the 450th anniversary from his death.

The meeting will give the opportunity to go through the director’s poetics, the main themes he has always been fascinated by: from sex to death, through painting, writing, body and food, the fear of flight and water and the mysteries of human existence.