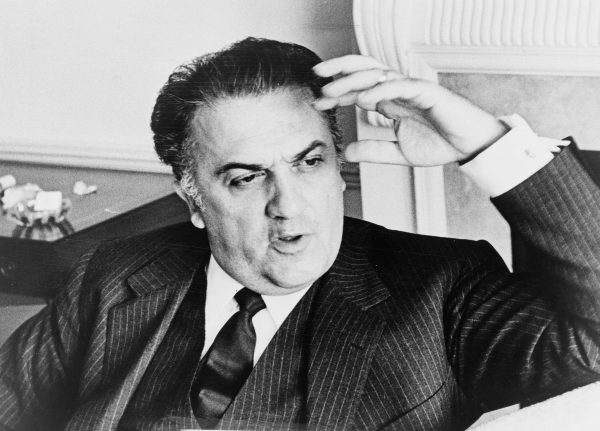 On 18 March, at GAMC, Viareggio, will open as world premiere the exhibit “The Journey of Mastorna – The dream of a film put on stage“ by Alessandro Romanini and Francesco Frigeri and produced by the Experimental Centre of Cinematography in Rome in collaboration with Istituto Luce. So, Lucca Film Festival e Europa Cinema celebrates a legendary film, among the most fascinating and mysterious unfinished works of the great masters of Italian Cinema.

Fellini’s circus comes again in his most evanescent character: Giuseppe Mastorna, violinist and clown. This looking for actor character (Totò and Mastroianni were candidates for the role), released by the pen of the Italian Master, seems to be one of the most fellinian inventions. In fact, the adjective-identity, disliked by the director, seems to adhere perfectly to the wandering Mastorna. Moreover, wanderers are typical of Fellini: Mastroianni and Anouk Aimée whiz on a convertible along the dark Roman night in La Dolce Vita; Giulietta Masina drives in a rainy night between The Spirits of betrayal and of bourgeois values; the ship of E la nave va wanders on the ocean between a rhinoceros and steam glasses.

“A huge airplane flies high altitude over an endless sea of clouds.”

Therefore, Mastorna journey is not only dreamed and with no destination, in the way to be properly fellinian, but is even a journey of Fellini himself, as a man and a film-maker. A self-fulfilling prophecy, and an extraordinary self-portrait of the Rimini Master, so very close to Guido of 8 1/2, but without the personification process through his self-mirroring actor Mastroianni. No actor seemed to be the right one for this part, which is as mysterious as it is personal. Maybe too personal, to the point that, almost possessed by his philosophical and professional identity, the journey of the director towards the character ends long before it reaches its destination. After one year of work, the cursed project is interrupted by an ironic sign, when television replaced, by mistake, the “TO BE CONTINUED …” with a categorical “THE END”.

Interiors. On the plane.

“Ladies and Gentlemen you are asked to fasten your seat belts”

The Journey of Mastorna narrates about the bewildered living of a circus musician felt from the sky on a Gothic and dreamy Germany: an emergency landing news declare the plane crash.

“Mastorna, a man about forty years old, takes off his headset that transmits sound from the film and watches, distracted and bored, the images moving silently on the small screen.”

Felt right in front of the Cologne Cathedral, the non-survivor is taken to a hotel where he attends the exhibition of an odalisque who suddenly gives birth to her son, at the center of the stage. In his room, Mastorna listen to the news on a german-speaking TV, about the story of a plane crash in the mountains, with no survivors. Mastorna died, but does not understand the German television that communicates it to him. Here he begins and, at the same time, ends his journey: between sleep and wakefulness, in those fleeting and strange places.

“Is this the second life, the real life? Is this the height where we were to arrive after many years of fears, anxieties, loneliness, hurt? A life so thin and bitter, everything to get to this wretched party? Is this the kingdom of God? “

The exhibit, inaugurated by Lucca Film Festival e Europa Cinema is the first stage of the five-year work of the National Film School, based on the preparatory materials of unfulfilled movies (from Fellini to Pasolini, from Bertolucci to Visconti), preserved by Istituto Luce . The students, under the supervision of Professor Francesco Frigeri, have achieved the 50 executive boards that will be presented in Viareggio, in addition to processing in 3D computer graphics; the students of the acting course will recreate the dialogues. A soundtrack will accompany interviews to Fellini, including the audition to Marcello Mastroianni, at Teatro 5, Cinecittà.

“Mastorna, with a satisfied smile for the success he is getting, motiones the crowd to be quiet, because he still has something to say.”