The young pope: An italian triumph 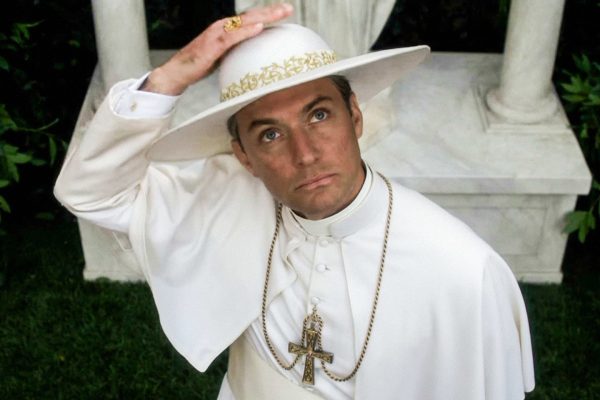 Last year, the italian director Paolo Sorrentino held a Masterclass at the Lucca film Festival-Europa where he spoke about his movies and his experience with famous actors. When a question about This must be the place’ protagonist was asked, he replied:

“Sean Penn gave a lot to the movie. The great actors are able to go beyond the director. They can truly take possession of the character, how he moves, how he walks…”.

It’s easy to think the same about Jude Law’s brilliant performance in The young pope, the successful tv series produced by Sky, Hbo and Canal+ and written and directed by the italian master.

Lenny Belardo (the protagonist) is a Summa of Sorrentino’s most typical characters and themes: he is disillusioned and cynical like Jep Gambardella, the iconic main character of The great beauty; he is a bit of a rockstar, like the pop singer (with too much make up on) Cheyenne. Most of all, he is a powerful man like Giulio Andreotti, whose life was told by Sorrentino in Il Divo, one of the biggest revelation of Cannes’s 61th edition and he is, like all Sorrentino’s characters, “A lonely man”.

Although Lenny is a young, handsome, charming, diabolic, highly conservative, quite dangerous and manipulative pope, everyone around him sees him as a wise guide and, as sister Mary describes him, simply “A Saint”, capable of performing miracles. Normal life just doesn’t suit him; he can’t live like a normal man because he can’t bear the weight of everyday feelings, such as love, joy and the pain that they can be the cause of, therefore he doesn’t want to be a normal man anymore; he refuses to have an image or a human body and wishes to not be himself anymore but just the medium between god and the people, the divine and the ordinary. He claims to be like God:

“One in three and three in one”

Bbut nevertheless he is simply a conservative, religious man whose main task during his papacy is to make a “revolution”. Lenny Belardo is a contradiction.

Sorrentino’s main character is not as humble as Pope Francis: he doesn’t want the church to be as simple and poor as possibile, instead, he aims to be like a baroque age’s pope, the ones who are remembered for making Rome one of the most beautiful city and also for being corrupted and barely interested in religious matters. During the whole series, Lenny has some struggle with is own faith and, in one remarkable episode, has some struggle with the pope clothes: he must decide what to wear at the meeting with the Cardinals, so he chooses a very beautiful, expensive and bright red dress, fills his fingers with rings, arms and body with jewels and he puts a kind of crown on top of his head, like the weird prelates in “ The holy fashion parade” sequence in Roma, a masterpiece of Sorrentino’s source of inspiration, Federico Fellini.

There’s another peculiar character in The young pope and is played by the italian actor Silvio Orlando; his name is “ Cardinal Voiello” and he is, above all, a Napoli F.C. supporter. Despite being Vatican’s secretary of state, Voiello is more of an economist and financial expert than a cardinal: as a matter of fact, he brags that he is a man of great knowledge and capacity, he is most deeply proud to have, in his bookshelf, seventeen (dispregiative) books written about him by many journalists. His profound mutation during the whole season is incredible.

Like Lenny and thanks to Lenny, he slowly becomes more of a “human” and the  sort of “love story” between him and sister Mary, is a demonstration of it: he frequently tells her “Sister Mary, i think that you’re even prettier with the night on”. His love is not an “mature” type of love; he falls in love like kids do. For the love is, of course, nothing more than taking care and caring about someone. One of Sorrentino’s cinema main topos is the mutation of the individual. We first know them as misanthropic, cynical, lonely and we can see, on the screen, in front our very own eyes, their mutation towards a more friendly, sweet, compassionate and often childish behavior towards the others. The urge of elementary feelings, like the company of a mother or of a friend, is the center of the italian director’s opus.

Sorrentino has managed to create a different kind of tv series, because he didn’t not make a normal one. He shot a movie, a very long one that lasts ten hours and never bores us. The young pope is a meditation about power and religion, where every episode has a precise structure: the first part contains many dialogs and little action, while the ending delivers a spectacular event, like the meeting of the cardinals in the beautifully reconstructed Sistine Chapel. The director doesn’t give up on his style; the camera moves as smoothly as in others Sorrentino’s movies with both long uncut scene, like the talk with Cardinal spencer and with the distinctive tracking shots.

The young pope can lead the way to other European’s directors Project; In fact, worldwide collaborations and co-production like the one we talked about, could be the future of television as they would partially put an end to America’s television series Hegemony. European cinema authors are becoming more famous year after year and a worldwide production can be a major help for a director in order to be known all over the world.

The only thing we have to do now is to wait for season two!